It can be one of the most effective ways to learn Italian.

Along with committing to a steady diet of Italian films,TV, and newspapers, Italian music is an excellent way to etch essential words and phrases into your lexicon. And it’s far from drudgery. I bring this up (and have before in a previous post) because so many people coming to Italy for extended periods or to live here are intimidated by the language. Learning more than a handful of greetings and daily phrases seems too daunting. I get it, believe me. Our adult brains just aren’t as receptive to new languages as when we were younger.

So, why not embrace a way to learn Italian that has you tapping your feet and singing along? This year’s Sanremo Music Festival has given me really good, fresh material.

If you’re reading this and you’re not familiar with this super-famous and revered annual Italian event, then I’d encourage you to get busy and read up on it. Apart from delivering great performances and songs that stick in your brain, the Sanremo Music Festival is an essential part of the Italian culture. Most Italians will look at you aghast if you are blank-faced when the festival is mentioned. And if you’re ignorant of one of Italy’s most important cultural events, you won’t score points with Italians.

For us, when the event began early this month, we remained glued to the TV every night. This is because this event is the official debut of songs that soon will be flooding the airwaves. Prior to the first performance at Sanremo, the songs haven’t been heard or released. Each artist or group performs the same song every night (with the exception of a tribute night to classic songs) with new costumes and often with brand-new choreography.

I was hooked from the get-go.

And this is why committing these songs to memory and listening to them, again and again, is an ideal way to learn Italian. When learning becomes fun and isn’t associated with a textbook, I’ve found that I retain a lot more.

For this year’s Sanremo contest, my first listen was almost entirely focused on the score and not the lyrics, though I was able to pick up many words and phrases. I let the music and its emotion (serious, sad, playful, sarcastic, etc.) speak to me. Then I jumped online and started learning the lyrics. By the conclusion of the event at almost 2 a.m. Sunday morning with the announcement of the winner (Mahmood & Blanco for Brividi), many of the songs already had made a home in my head.

Learn Italian with the Sanremo 2022 playlist.

There’s one on Apple Music and one on Spotify. I listen to the playlist almost daily. And I keep a printout of the lyrics handy as I listen. This is helping me not only to beef up my Italian vocabulary, but it’s also helping me to see important verb tenses in action.

I want to help you to learn Italian with some starter resources.

That’s why I’ve chosen five of my favorite songs from this year’s Sanremo Festival and included pdfs with Italian-to-English translations. I’ve also embedded a YouTube link for the official video of each song.

written and performed by Mahmood & Blanco

This song was the big winner this year and will go on to represent Italy in the Eurovision contest. It’s a heartbreaking song about the angst of imperfect love.

written and performed by Elisa

Elisa is a vocal powerhouse and has enjoyed a long history of success in Italy and Europe. This arrangement and orchestration of this song will carry you away. Elisa won special recognition for this song with an award chosen by the orchestra.

Of all the songs in this year’s festival, this one made me want to get up and dance. It has a throw-back 60’s or 70’s vibe. Morandi is an Italian icon and seeing him perform and score so high in the contest was a real treat.

Ovunque Sarai (Wherever You Will Be)

written and performed by Irama

This was my favorite song of Sanremo. The young performer had been scheduled to perform at last year’s festival but had Covid. He seemed a bit timid, singing softly at first. But then his voice took off and I had chills. The song is sung to someone who is no longer here. It’s a tribute to someone special. It’s been recently revealed that the song was written about his grandmother who died.

I suspect that this song is getting more airplay than all others. It’s that catchy. Without understanding the lyrics you might be tempted to think this is a light fun song. But, it’s dark, with an end-of-the-world sarcasm. Still, it’s a toe-tapper that you will be singing to yourself before long! 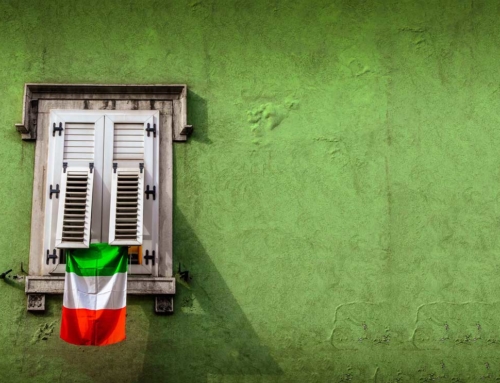 When Not Speaking Italian Becomes a Problem If You’re Accused of Having “Le Braccia Corte” (Short arms)… How to Say “Take It or Leave It” in Italian