Food at Roma Termini Has Gone from Dismal to Gourmet

Food at Roma Termini Has Gone from Dismal to Gourmet

Used to be that I wanted to avoid Rome’s central train station like the plague.

Well, the massive throngs of people and having to constantly watch my bags would render me in a state of exhausting hypervigilance. But, Rome is Rome and, like any big city, you have to be mindful of the opportunists who are adept at scoping out distracted and confused tourists. But, I know the drill now, having transited Roma Termini so many times. But, the thing I always would dread the most would be trying to score REAL food choices, other than sandwiches, pizza slices, and bags of chips. For me, who eats mostly low-carb these days, that would leave me just going hungry, unless I had enough time and bravery to exit the station and hit a local kebab joint.

Woo hoo! I’m not exactly sure when this happened, but I suspect it has been within the last couple of years. And, let me tell you, during the last couple of trips requiring transiting Rome, I’ve actually looked forward to my arrival at Roma Termini because I know I am going to have plentiful food choices, many of them gourmet! Imagine my delight ascending the escalator for the first time to the expansive and snazzy new “food court” that overlooks the sprawling tracks of Rome’s central train station. I actually spent twenty minutes taking multiple loops to mentally register all of the choices before I made my decision (it ended up being a yummy sashimi box).

During my most recent experience transiting Rome, I opted for a gourmet picnic to go.

From a place whose specialty is pasta made on the spot, though I opted for a “platter” of cured meats and cheeses. On the spur of the moment, I decided to whip out my iPhone, which usually isn’t my camera of choice, and decided to chronicle the experience and take you on a quick tour of the upscale food options that now await you at Roma Termini! Even Olivia, the newest of our cat children, decided to join me when doing the introductory commentary (at home of course!). Thank you, Olivia, for providing some additional entertainment. 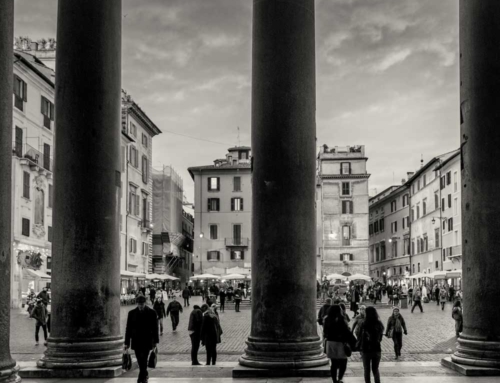 Emerging from the Pantheon at Dusk

A surprisingly inspiring bus ride on a rainy morning in Rome.

Stepping into an Italian Pedestrian Crossing? Proceed with Caution.