A front-row seat and an iPhone yield surprising results.

Normally, for a spectacle of the magnitude of La Festa del Redentore, I’d be packing my best camera equipment. But this year I thought, “Nah, I just want to relax and enjoy the show.” So, I left my bulky gear behind and headed out with just my iPhone 6 Plus parked in my back pocket. We were going to be on a boat anyway, parked in a sea of boats at the mouth of Venice’s Grand canal and I wanted the evening to be stress-free. Our hosts had already arranged for well-stocked coolers of Prosecco, snacks, and cold seafood dishes. But, once the sun began to set and the evening got cranked up, I started wishing I had my high-end camera within reach. The spectacle unfolding in front of me was that captivating. So, it was me and my iPhone camera to capture what I could. Kind of like “survival photography.” No depth of field control. No zoom. No shutter speed control. Just composition. In other words, I had to go back to the basics of good composition and finding the best lighting opportunities.

But, first, what is La Festa del Redentore?

“The Feast of the Redeemer” is a grand celebration, one of the most important Venice celebrations, and it began in 1576 to give thanks for the end of the plague that took 50,000 lives. Even the great painter, Titian (Tiziano) was a victim of this horrible scourge. The festival has been faithfully celebrated ever since and now its fireworks display literally stuns a person into silent awe. Read more about La Fest del Redentore at Wikipedia.

We started with a Spritz Aperol, the official drink of Venice

What better way to fortify me for a creative opportunity unfolding in front of me with the barest of assets. In the image below you can see a “parking lot” beginning to fill to capacity. The sun has almost set. The man below is telling a friend where to drop anchor. Many boats tie themselves together in a daisy chain. Staking Out a Spot © Jed Smith

This may be my favorite image from the evening. Shooting with an iPhone in such low light is begging for trouble. But, with a couple of Spritz Aperols and a Prosecco or two in my belly, I said, “What the hell!” as I looked towards San Marco, hoping I could somehow capture the magic in front of me. The result? A seeming marriage of photography and an oil painting. The sky lights up.

Both the featured image in this post and the one above came just seconds apart. That’s how much the sky changed in a matter of moments during a fireworks display that I will never forget. A Nighttime Excursion in Surreal Venice 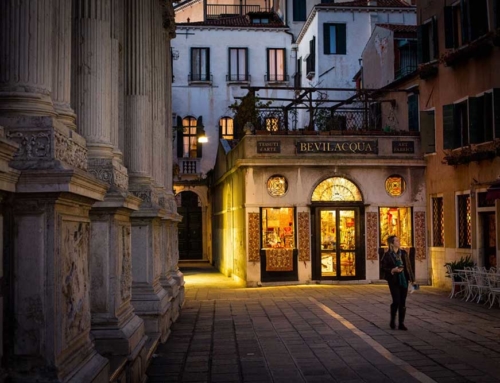 The Allure of Venice at Night