For me, despair comes when I enter circular thinking in an attempt to figure out two things: 1) What the hell is going on? and 2) What the hell can I do about it? At my “mature” age you’d think I’d become wise to the futile machinations of the mind. When I’m seeking light, that’s actually the last place I should go. A long personal history with my bossy mind tells me that I’ll only experience more anxiety.

Seeking light involves getting outside of myself.

Worry and overthinking just keep me glued inside, literally and figuratively. It’s like shutting all the windows and progressively turning off the lights. I can be performing tasks, and I can be out and about, but in either scenario, I’m locked up in a dark place. When I’m seeking light, I have to find some kind of centrifugal force that takes me away from the gravitational pull of a cunning mind that commands, “Don’t look anywhere else. I have the answers.” Finding a path out of incessant worry (there’s plenty these days).

Even in beautiful Italy. While new COVID cases in the U.S. are flirting with passing 100k a day, Italy passed 30k in the last couple of days. We’re clearly not out of the woods and our government has been meeting to craft a tightening of the bolts, aka “measures” to turn this thing around. And, as an American citizen, watching what I see as off-the-rails behaviors during the heated U.S. election, easily causes every fiber of my being to tense up (and freeze).

I may be an ocean away from the train-speeding-off-the-rails scenario, but Italy is giving me plenty of fodder for worry and anxiety.

Like so many people, I’m struggling to make sense off all the madness. We humans loathe not being able to contain something (at least intellectually) in an explanation or a reason why. Alan Watts (more on him at Wikipedia) writes about this dilemma in his book, The Wisdom of Insecurity (find it on Amazon):

“Speculative philosphy, as we know it in the West, is almost entirely a symptom of the divided mind, of man trying to stand outside himself and his experience in order to verbalize and define it. It is a vicious circle, like everything else which the divided mind attempts.”

“So long as the mind is split, life is perpetual conflict, tension, frustration, and disillusion. Suffering is piled on suffering, fear on fear, and boredom on boredom. The more the fly struggles to get out of the honey, the faster he is stuck.”

Yep, stuck is exactly where I am when I seek answers through intellectual deduction.

Seeking light and restoring my soul. What can I do?

I don’t consider myself part of a particular faith. Like Alan Watts, I’m a mongrel in this regard. But, for some reason, the 23rd Psalm has attached itself to me and it’s way better than any pharmaceutical sedative. It’s my mantra—right after uttering (internally, but often out loud when no one is around), “I don’t know anything.” It is my cry to the universe, my surrender to the things I just don’t get and won’t get through intellectual processes. Because the 23rd Psalm conjures up images of verdant pastures and a kindly presence guiding me in my ignorance, I head outside into nature. I head outside and look to the heavens.

So, on a recent evening of particularly heavy worry and dread, I headed outside seeking light that I wasn’t finding internally.

We’d taken a trip to visit family in Liguria and were staying close to the sea. So, I put on my comfy Pumas and walked and walked and walked. Man, did nature deliver a big dose of light—spectacular light in colors that astounded me. In fact, in processing the images in this post I had to rein them in. Yes, they were that incredible. While my initial steps were leaden and trudging, subsequent steps became increasingly relaxed and even light. As the evening sky over the harbor hypnotized me, I left the heaviness of hardened internal dialog. Nature was commanding me, “Pay attention!” And that’s why I’m closing this post now and letting you swim around in these images, hastily captured with my iPhone (sorry for the less-than-crisp resolution). I only know that I needed a big dose of optimism, a reminder that life is way bigger than I can conceive. Surrendering to uncertainty and residing in the present moment is where I find grounding and peace. 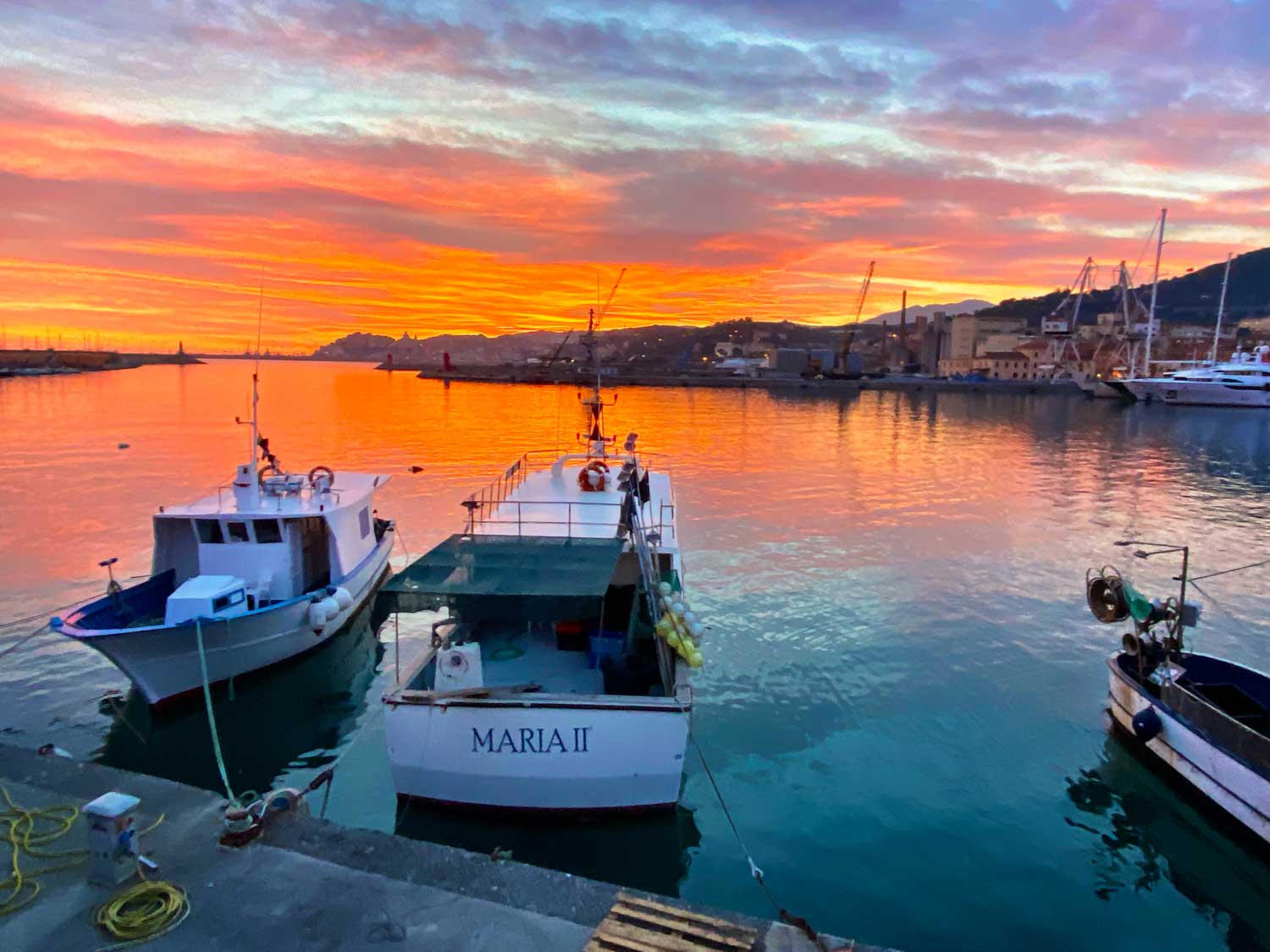 I’d encourage you to read a recent post “Can You Make Peace with Yourself During Crisis?”  We’re all seeking light, aren’t we? When You Speak Italian, Show Respect Introducing “Going with the Flow” Back to Valloria, the Village of Painted Doors Let the River of Life Carry You Along